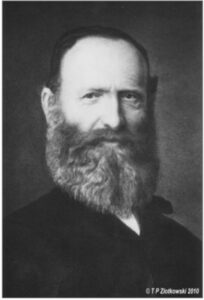 Zlotkowski Heights may be remembered by some of the older citizens of Wollongong its currency is lost amongst many.  Zlotkowski Heights (near the bottom of Mt Keira) was named as such because the owner of the property was Ignacy Zlotkowski who had lived there for few years and owned the property for over 30 years.  His vision and contribution for a greater Wollongong marks him as the first Polish pioneer of the region who, for 20 years, called Wollongong home.

A professor of modern languages, Ignacy Zlotkowski was born in 1817 in Warsaw, Poland, into a family of Polish nobility.  In 1841 he escaped from Poland  to France, and then to Scotland as a political refugee using his French passport, where he taught languages at Aberdeen University , Kings College.  After leaving Scotland in 1852, Zlotkowski arrived in Australia on board the Banshee on 5 March 1853 as one of a few paying passengers.  He brought with him recommendation letters from England and Scotland which contributed to his Australian naturalisation in just few days after on his arrival on 17 March 1853.

Arriving in Wollongong   The precise date of his arrival in Wollongong is unknown, but in June 1854 he became an owner of a block of land and its building located at Harbour Street, Wollongong.  In the early 1850s the building was used as a Medical Centre, then as a concert hall which Zlotkowski would occasionally allow to be used free of charge for charity functions.  In December 1858 the building became the premises for the Smith and Sons Dancing Academy (5).  In the late 1870s, the building stood empty for several years until it was demolished in the 1880s.  It was sold by Zlotkowski’s family to the Sisters of Good Samaritan in 1897.

Ignacy Zlotkowski married Jane Haigh of Market Square  in Wollongong’s Presbyterian Church on 18 September 1855.  They had four sons and two daughters.  The Zlotkowski family lived in Wollongong for nearly 20 years.  During this time, they lived in Jane’s family home in Market Square, and then moved to their farm house in Montenegro  (Black Mountain) near Mt Keira, later known as Zlotkowski Heights.  In the 1860s the family moved to “Bayalla” Cottage, in Smith Street, Wollongong, living there until the early 1870s.

Ignacy and Jane were both involved in teaching.  Jane Haigh, who was known in Wollongong as Madame Zlotkowski, owned and ran a private secondary school for boys, which was located in Market Square.

In the 1860s and 1870s Zlotkowski travelled to Sydney to teach French, German and Italian in a private school located in the University of Sydney Hall.

His children attended the Wollongong National School  and Zlotkowski himself was involved in the school’s life.  He was not only involved in organising a testimonial for the, then, school’s teacher  but he was also chairman of the ceremony, which was attended by many prominent citizens of the town like Charles Throsby Smith, John Stewart and George Hewlett.  After the ceremony, an Illawarra Mercury journalist wrote “Mr. Zlotkowski proved himself as a fine fellow in the matter; he had come out in the right manner and in the right time and he trusted that they would find him working in future occasion”.

Multilingual interpreter/translator Zlotkowski was Wollongong’s first multilingual interpreter and translator.  On 7 April 1856, the Illawarra Mercury published ‘A Noble Act’, French literature translated into English by Zlotkowski.  The editors of the Illawarra Mercury valued his opinion about the new German Periodical (published in German) which was subscribed by the handful of Germans living at that time in Wollongong.

His multilingual skills and proximity to Wollongong Harbour were used to help to communicate with French, Italian and German migrants who were arriving by steamers from Sydney, usually to work as servants on the farms.  He was not only an interpreter and arbitrator (walking to Kiama when needed) but an advocate for their rights.  In his own article to the Editor of The Illawarra Mercury he wrote: ‘ …. I think that every farmer that hires a foreign servant ought to provide him with food whilst on board, and a cart ought to be ready for him, to take him and his luggage to his new home…’.

In 1863 his knowledge of French was also used by the Wollongong’s Mayor, Dr Lambert.  On one occasion Zlotkowski was used as an interpreter at a meeting that took place at Mt Keira Mine, when Dr Lambert tried to convince a French steamer commander that the coal from the Keira and Bulli Mines was of good quality and could by imported to France.

Popular and influential citizen of Wollongong   Given his involvement in local issues, it is not surprising that Zlotkowski’s name came up during a nomination meeting for the Alderman of Wollongong Municipal Council.  The meeting took place on 17 February 1864 at the Wollongong Court House.  Zlotkowski stated before the voting started that he never had political ambitions.  Regardless, voting was in his favour and he was elected.  Why was this Polish man so popular, why did he had so much trust and respect?

In May 1864, the town entrusted him, as one of three representatives to go to Sydney with a petition to the NSW Minister of Public Works, regarding the poor quality of work carried out in Wollongong Harbour and then a second time in September 1864 when the town was lobbying for a railway track from Bulli to Wollongong.  The track could be used to transport more coal from local mines, creating jobs in the Illawarra.

Ignacy is remembered as the owner of Zlotkowski Heights, the area between Mt Keira Road, Robsons Street and Keira Mine Road which he and his wife owned from 1856 to 1887.  This was farming land, well cleared, with a dairy cottage on it and beautiful views of Wollongong and the ocean.

In 1858 St Michael’s Anglican Church, located on Corrimal Street was demolished and rebuilt on its current site on Market Street using its original stones.  The expansion of the church required additional stones which were brought from Zlotkowski Heights.

He died on 3 February 1886 at Five Dock, Sydney and was buried at the Rookwood Cemetery, Sydney.  Once a respectable and active citizen of Wollongong, he became the forgotten first Polish pioneer of this town.

After Ignacy Zlotkowski’s death in 1886, the land was divided with new streets created and named after Wollongong aldermen: Parsons, Cochrane, Poulter and Armstrong.  An auction took place on 2 November 1887 with live music, free drinks and free transport from the outskirts of Wollongong.  Most of the blocks were sold on that day including the 24 acre block known as Gallagher’s Farm.

In the 1900s, many miners’ cottages were built in the newly subdivided area as it was close to Mt. Keira Mine.  Even in the 1950s, the area was still referred to as Zlotkowski’s Heights, Zlotkowski’s Hill  or just Zlotkowski.  Unfortunately none of the created streets were named after him.