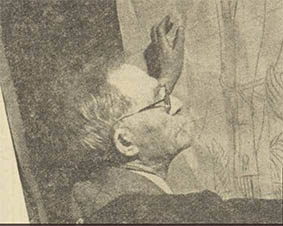 In 1938 the Wollongong Presbyterian community celebrated the opening of the new Saint Andrew’s Church.  A stained glass window was donated to the Church in dedication to William and Elizabeth James of Shellharbour with the inscription; ‘I was a stranger and you took me in’ and was followed by ‘In a grateful remembrance of William James of Shellharbour and his wife Elizabeth, who in 1882 befriended the artist and his father’.

The artist behind the window was Polish born Jan Radeski (John Radecki).  John Radecki arrived in Australia at the age of 16 on board the ‘Forfarshire’ on 16 January 1882 with his four siblings and parents, Paul and Victoria Radeski.  The reason for the family’s migration and settlement in Wollongong is not known.  It may have been a job opportunity in one of the local coal mines.  However, it is known that travelling with them was Thomas and Charlotte Wearn and their children who also settled in Wollongong.

John Radecki’s family was not wealthy, struggling in the beginning.  John and his father had no work.  When work became available in Kiama (30km from Wollongong) in one of the quarries, John and his father Paul walked there.  They were not lucky, when they got there they found that the jobs had already been taken.  Tired and hungry they had to walk back to Wollongong.  On the way back, in Dunmore they met Mr Fuller who introduced them to Mr William James who offered them food and overnight shelter.  This gesture of kindness stayed in the memory of John Radecki all his life and more than 50 years later he acknowledged the kindness he had experienced from Elizabeth and William James with the stained glass window.

Finally, John and his father Paul found work in one of the Illawarra’s coal mines.  Paul worked in the mine for many years, but John only worked in the mine for a year when he left Wollongong in 1883 moving to Sydney to continue his study of art, the study which he had started at the German Art School in Posen.  He studied at Sydney’s Mechanics School of Art (later known as Sydney Technical College, Pitt Street) where he further developed his natural talent in drawing.

Radecki has the reputation, of not only being the first Australian trained artist in stained glass, but of being one of the best of his time.  Today his artistic work can be seen in various churches including Saint Mary’s Cathedral, Sydney (east rose window); the Navel Chapel, Garden Island, Sydney; Commonwealth Bank, Sydney (the ceiling of the Grand Hall); Mitchell Library, Sydney (Caxton window), and in many churches in country towns across NSW.

John Radecki lived in Wollongong for a very short time but he visited the town very often, not only to see his parents and sister Valentina or take a walk along Wollongong’s beautiful beaches, but also to visit local parishioners and authorities of various Wollongong churches.  These Wollongong parishioners and church authorities had commissioned him to design and produce stained glass windows usually to commemorate their loved ones.

Today, three of Wollongong’s church buildings and two in the northern suburbs of Wollongong, have some of the best examples of stained glass windows which were designed by John Radecki and produced by John Ashwin & Co.  These stained glass works have both historical and artistic value.  The filtered sunlight (depending on the strength of the light – morning or afternoon sun) that comes through purposefully chosen coloured glass contributes to the churches’ unique atmosphere.  The stained glass windows can be found in:

Paul and Victoria Radeski
Parents of the First Australian stained glass artist. Arrived Wollongong in 1882 with their 5 children. They had two more children who were born in Wollongong. Paul worked in coal mine, died in 1904. He was the first Polish born person to be buried in Wollongong. Victoria died in 1932.

Above image of John Radeski (Trove)