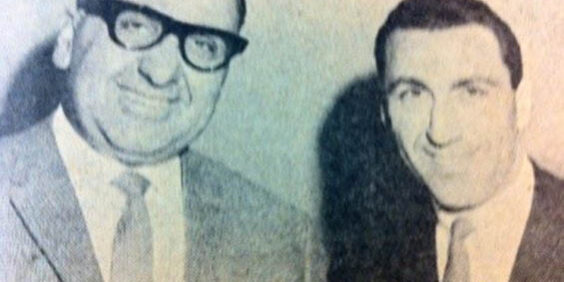 The early Lebanese migrants started arriving in Australia in the mid-19th century.  They came from the area of Mount Lebanon.  Because this area was the province of Syria in the Ottoman Empire (Turkish territory), they were called ‘Syrians’ or ‘Ottomans’.  Financial hardship and religious persecution were some of the reasons the Lebanese left their homeland country.

A large number of Lebanese migrants, who arrived in NSW during the late 19th and beginning of the 20th century, settled in Redfern, Sydney.  Many of them were self employed and owned businesses and warehouses which provided not only employment to those Lebanese who lived in the Redfern area, but also provided goods to hawkers.

From the owners of the warehouses the newly arrived Lebanese received (sometimes on credit) suitcases full of drapery, manchester or small goods such as cotton thread, ribbons, handkerchiefs and more.  These Lebanese, known as Syrian hawkers, with full suitcases travelled to small country towns of NSW where they sold their goods.  Usually, after few years on the road, the Syrian hawkers would make enough money to establish their own businesses such as general stores, drapery and manchester stores, men’s and women’s clothing stores, fruit and vegetable shops, as well as cafes and milk bars.  In 1911 out of 1,297 Lebanese males who settled in NSW, 455 were store keepers and hawkers.

Assaf (George) Badran was born in 1878 in the small village of near Byblos, Lebanon.  His mother died at his birth and so as baby, the whole village took care of him.  The living conditions in the village of El-Monsif were very harsh.  At age 18 he left Lebanon and went to New York, USA where he was hawker driving a sulky pulled by an old horse with only one eye as at that time he could not afford a better horse.  After four years he went  back to his village in Lebanon where he married and used the money he made in the USA to establish himself as the owner of a small shop.

Post World War One, in 1921, hardship and religious persecutions forced him to leave Lebanon to try his luck again, this time in Australia.  He arrived in Sydney, Redfern where he met other Lebanese (called Syrians at that time) who owned shops and warehouses.  They gave him a suitcase full of clothes and materials on credit and it was from this he was able to establish himself as a hawker.

Assaf (George) Badran, arrived in Wollongong in 1921 as a Syrian hawker.  After a whole day of hawking from house to house in the suburbs and the farms, he stayed overnight at 144 Crown Street, Wollongong.  George Badran liked Wollongong and its suburbs from his very first day and decided to stay in town for good.  At that time he was one of only five Syrians living in Wollongong.

For the next two years he rented the bottom floor of the house where he had previously stayed overnight, bringing goods from Sydney and hawking them in the Illawarra.  When he made enough money he bought the house he was renting and converted it to a shop where he sold clothes and materials.  Badran’s shop was a very successful business and George found he needed someone to help, especially from 1926 when he expanded his business to selling silks in his store.

George’s son Michael was studying engineering at the American University in Beirut and in 1931, forsaking his studies, came to Australia to help his father.  Michael Badran was a very successful business entrepreneur.  Badran’s shop was booming and making enough money to allow them to build the splendid ‘Normandie Hotel’ in Bourke Street in 1946.  It was the pride of the Badran family and was named after the famous ‘Normandy’ Hotel in Beirut.

George Badran died in 1953 in Wollongong.  In 1954, after George’s death, Michael brought his son Raymond from Lebanon to Wollongong (Raymond was born in Wollongong, but went to Lebanon with his sick mother and lived there for 19 years).  At the time Raymond, like his father, was also studying engineering at the American University in Beirut.  Under Michael and Raymond’s management, in the 1950s, the Badran’s shop was known as the biggest silk store outside of Sydney and was one of the largest importers of fabrics.  The shop was modernised and extended to a double storey building with a prestigious look in 1958.  For over 80 years the women of Wollongong and its suburbs were dressed by clothes bought from Badrans.  Badrans closed its doors in 2004.

The success of the business was a result of “hard work, passion, knowledge and the love of Wollongong and the love of Badrans to Wollongong which allowed it to last for a long time”, said Mr Raymond Badran who went on to say, “In every town or village in Australia there is a Lebanese who open the shutters of a shop with sunrise and closes with sunset”.