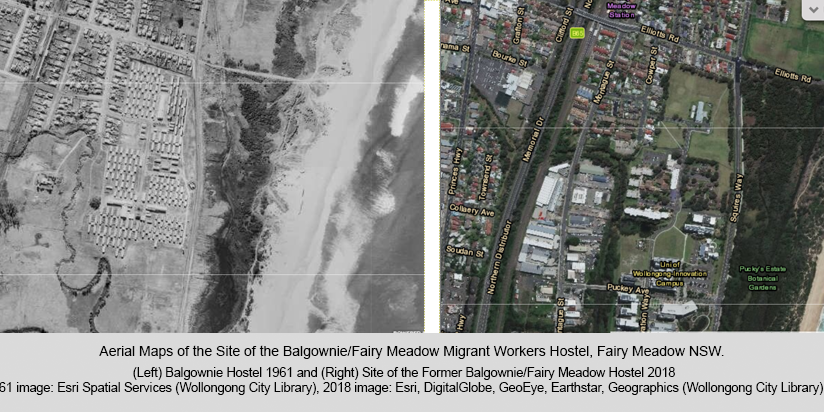 My parents, Derek and Margaret (Peggy) Hart, my two older brothers Laurie and Chris, my younger sister Jackie and I left Wales, UK, in 1965.  We travelled by air via the USA (possibly Los Angeles) and arrived in Australia on 2 April 1965.  The decision to come to Australia is that my parents wanted better options for themselves and us, their children.

I remember how hot it was as we travelled from Sydney by train to Wollongong then via taxi to Balgownie Hostel, (later to be known as Fairy Meadow Hostel).  We were still in our winter clothes when we arrived so you can imagine how hot we were.

We lived in Balgownie Hostel from April 1965 to May 1967.   My youngest brother, Richard, was born whilst we were on the hostel.

I thought Balgownie Hostel was a great place.  I could stay outside most days and get up to all sorts of mischief.  I even got a tan and lost that white pasty look.  Initially though it was a big shock, but as we were with others who were in the same position it helped.  As a child on the hostel it was always an adventure.  Signing up to play soccer and to do boxing, playing in the Rec Room.  Going fishing for the first time in the creek.  Spending the summer at the beach.  I think it was great for us kids, but our parents had a more difficult time I’m sure.  I know not long after arriving we had a family discussion about moving to South Africa, thankfully that idea was squashed.

The only downside I can remember is the food wasn’t all that crash hot but we ate it.  As our parents established themselves, the first thing bought was an electric frying pan so Mum could cook something different from what was being supplied on a repetitive basis from the meal rooms.  The toilets/showers and laundry blocks were definitely a surprise to all of us.

There were so many different nationalities living there.  I’m sure it had its own social class structure but as a child you simply didn’t care who you played with.  I thought it was great meeting kids from different countries or even from different towns in the UK.  I must admit it did take me a while to like garlic and the odour that came with eating it.

It wasn’t long before my name was changed from Anthony (the name I was christened and known as) to Tony!  I quite liked the name, so it stuck.  I’ve been known by that name ever since.

I always seemed to find something to do, if it wasn’t playing with others it was spending my spare time at Cobber Elliots Horse Riding School.  Whilst I always admired horses, it was there my passion for them really developed.  This has now been a lifelong journey for me with them, culminating in my appointment as a Director and General Manager of the Australian Trail Horse Riders Association.  Horses have allowed me to travel and see so much of Australia.  To this day I still have a couple of them and ride most weeks.

Initially I went to Towradgi Primary Public School and was totally surprised when I was made a prefect in Year 6.  It was whilst attending this school that decimal currency came in.  That was exciting!  I used to love the cream buns sold at the school canteen.  It was there I also was introduced to the Australian way of how to play marbles and jacks.  This was quite different to what I was used to.

Later I attended Corrimal High School, but this was only for a short time (5-6 months) as we were allotted a “Commission House” at Warilla.  This was most interesting for us as Dad had to landscape the grounds and even cut the grass with a motorised lawn mower.  Definitely a first for us.

Following the move to Warilla I attended Warilla High School and thought I was really short changed as I had to undergo the half yearly exams again which I had only just completed at Corrimal High.  I was most displeased.

For a while there it seemed as if we were constantly moving and having to make new friends.  I know my interest in school waned significantly and I left as early as I possibly could.  I guess we were much luckier back then as jobs were abundant.  My first job was in David Jones Wollongong working out of the Chicken Spot.  I had a great time there and learnt so much.  This was then followed by a brief stint on the Railways and finally working for BHP in 1970 (or AIS as it was known then) for 40 years, retiring in 2010.

I’m sure like all immigrant families, we had to purchase so much to set up our new home.  Work was abundant back then and there was no shortage of people wanting your money.  I remember the Waltons men going door to door selling or collecting payments.

This was also when I first heard of “Hire Purchase” and the extraordinary interest rates being applied to loans.  As most immigrants had very little when arriving here, this was quite often, the only way of furnishing their new housing commission home.  From memory, a three room plan was on offer from the likes of Waltons at this time.

I think it’s fair to say, I have thought of myself as being “Australian” from day one of my arrival.  I fit in here, I always seem to.  I became an official “Australian Citizen” in 2002, a long time since my arrival but that is another story.

I married young in 1973 (not uncommon during that time).  My wife and I have raised three great children (now adults) and are grandparents to six.  We are still together after forty six years.  Life has been good to me, I don’t believe I would have had the same opportunities presented had my parents not decided to immigrate.

My wife and I have now travelled extensively including back to my place of birth which I found to be quite gloomy and overcast.  We both realise there is no place but HOME.