After World War 2, in the 1940s and 1950s, practically every industry in Australia was experiencing labour shortages and were relying on the Government immigration schemes.  Housing materials were also in short supply throughout Australia after World War 2 and problems with Government finance for hostels and union disputes all contributed to the delay in building suitable Commonwealth accommodation to house people who had applied to migrate to Australia through the schemes.

To alleviate their labour shortages, AI&S instituted a scheme to recruit suitable British migrants by arrangement with the Government’s immigration authorities.  A proportion of the migrants would be assigned to the steel industry and with the construction of a company hostel would enable AI&S to provide accommodation for them at Port Kembla, thereby not having to rely on the availability of Commonwealth Hostel accommodation.  In 1947, AI&S Board of Directors approved the building of their own company hostel which they were to name “Karingal”.  Karingal, in the language of the First Nations people, is said to mean “Happy Camp” or “Happy House”.

The building plans for Karingal Hostel were put before the Central Illawarra Shire Council by AI&S on 28 April 1947.  AI&S intended to construct accommodation for 100 of its single male employees near their Kembla works at a cost of £44,000.  Two sites had been suggested, one at the corner of Five Islands and Springhill Roads at Cringila which was opposite a play area, and the other on the eastern side of the works at Steelhaven near the existing temporary barracks for Concrete Constructions Ltd and “Spoonerville”.  Some Councillors preferred the latter site as it would keep all the temporary buildings in one place, whilst others thought the first site far more suitable.  AI&S intended to appoint a resident manager for Karingal Hostel and when the hostel was no longer required AI&S could hand it over to Council or the community.  Permission was given to AI&S by Council to build Karingal Hostel at the Cringila site on the corner of Five Islands Road and Springhill Road. 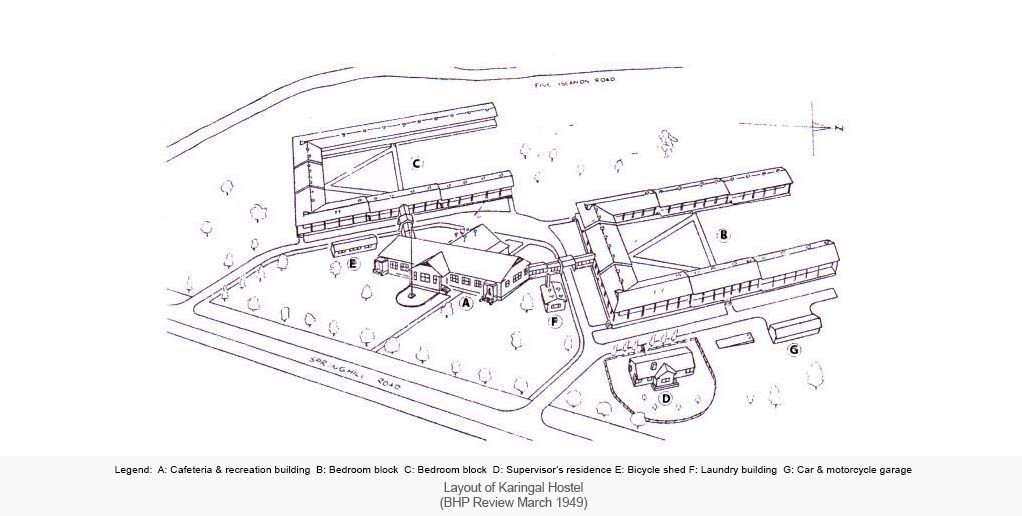 Karingal was a large hostel, purpose built by AI&S in late 1948 primarily for single, British male migrants.  In the early days of migration, Karingal was to play an important role in the success of the immigration scheme by providing much needed housing for AI&S immigrant workforce enabling AI&S to address its labour shortages, increase its production output, and work towards its expansion programme.

Not long after the building of Karingal Hostel, the first Commonwealth Hostel was being constructed by the Commonwealth Government nearby on Five Islands Road Unanderra to house 400 men. 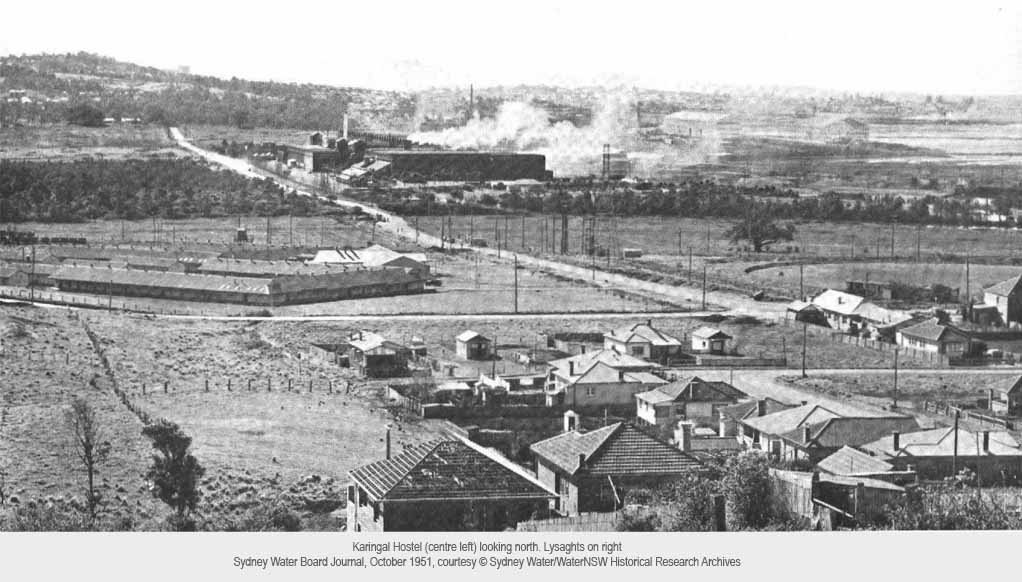 Karingal Hostel was built in two sections.  The first section, consisting of two bedroom blocks each able to accommodate 104 men, was built by contractors.  It was of wood and fibro construction with iron roofing.  The accommodation consisted of: one bedroom units, large cafeteria type dining room which was specially heated and ventilated, canteen, banking service, library, recreation room, tiled shower and lavatory blocks and, laundry with electric coppers.

While under construction, Council approval for extensions at Karingal was given to AI&S in August 1948.  Cost of the extensions was given at £70,500.  This second section was of a temporary type and consisted of prefabricated fibro huts made at the steel work’s carpenter shop and erected onsite under contract.  The second section of Karingal had double rooms.

Karingal commenced operation in late 1948 starting with accommodation for 208 men in single rooms and later an addition of 96 double rooms to accommodate up to 400 occupants.  In 1966 a new residential block was built that gave the hostel about 100 additional rooms.  The total value of all the building applications made by AI&S for Karingal Hostel was estimated to be £168,361.   By its tenth year of existence it had provided accommodation for some 6700 employees. 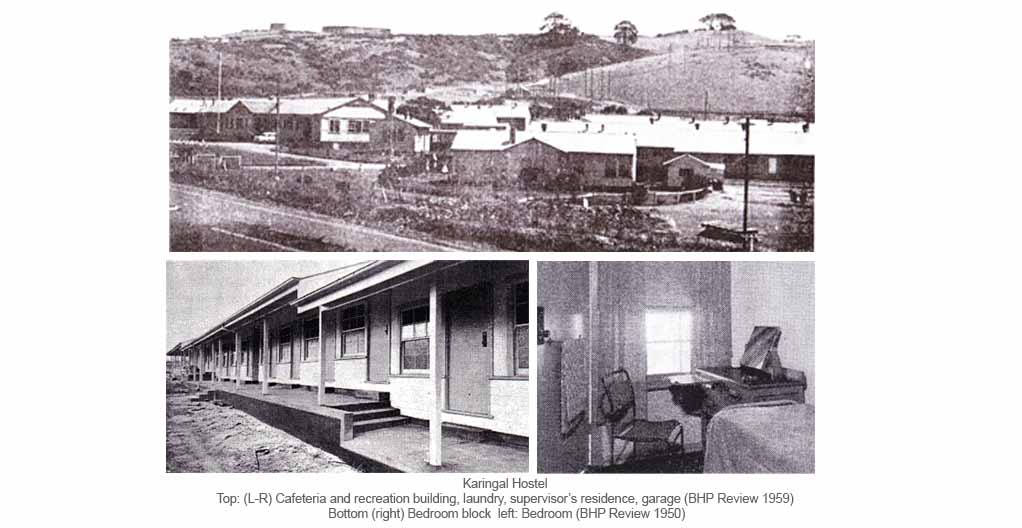 The first 19 migrants to settle at Karingal arrived in Australia onboard the “Georgie” on 14 February 1949.  They were followed by a further 10 who arrived onboard the “Asturias” on 5 March 1949.  On the 19 March 1949 the “Empire Brent” arrived in Sydney bringing a further 16 men to be employed at AI&S Kembla works.

By April 1949 there was a total of 45 men living at Karingal.  Many were ex-Servicemen and had come from all parts of England, Scotland and Wales.  Their trades were: Fitters and Pipe Fitters, Turners and Machinists Oxy-Welders, Blacksmiths, Boilermakers, Marker-Off, Boilermaker-welders, Moulders, Bricklayers and Carpenters.

Though Karingal was built specifically to house single men, many of the married men who arrived without their families resided at Karingal too, but once they got to Port Kembla they were quick to acquire accommodation to have their families join them.  Finding housing for their families was made easier when AI&S had been allocated 75% of the houses in the general Housing Commission ballots for the Industrial Allocation and sponsored their employees at the Steelworks and Collieries.  This was a different housing scheme that was made available to AI&S staff.

In April 1948 AI&S had commenced employing about forty displaced persons, ‘Balts’, at Iron Knob, with the intentions to absorb 400 Balts at Port Kembla when Commonwealth Government single men’s hostels were available to house them. The Balts are people from Latvia, Estonia and Lithuania.  The first ever shipment to Australia of displaced persons in September 1947 was entirely Balts.  However, it was not only the Balts who would be brought to Australia, but other displaced persons including Jewish and non-Jewish Poles, Ukrainians, Russians, Belarussians, Hungarians, people from (the former) Yugoslavia and nationals of Romania, Bulgaria and Albania, and others. By September 1949 the first large group of 160 displaced persons arrived in Wollongong of which 70 had been allocated to work at AI&S.  Another 160 were expected in October all of which were to work for AI&S.  This was in accordance with the agreement between the Commonwealth Government and the International Refugee Organisation.  As part of the agreement, displaced persons had to undertake work as directed by the Commonwealth immigration authorities for a period of two years in return for accommodation in Australia.  In AI&S journals they were referred to as “New Australians”.  At AI&S New Australians were engaged as labourers, until such time vacancies suitable to their capabilities occurred and they were absorbed into production departments.  It was part of the Commonwealth Government agreement that New Australians could not be elevated to the status of tradesmen unless approval was given by a Government employment officer.  Employment of New Australians was seen to be of benefit to the older employees as the New Australians filled the unskilled jobs allowing the Australian steel workers to take advantage of opportunities available in the skilled trades.  Many of the New Australian migrants were eventually accommodated at the Government Hostel at Unanderra or Steelhaven and some were also accommodated at Karingal. Most were separated from their wives and children who had been placed in holding camps throughout NSW.  Karingal also accommodated Australian workers.

The majority of the female staff at Karingal were wives of employees of men working in the heavy industries.

By June 1950, 518 New Australian migrants were employed in various capacities at the Kembla works.  The additional migrants enabled AI&S a greater use of the plant’s steelmaking capacity and the carrying out of its extensive construction programme.

By April 1959 Karingal Hostel was able to accommodate 400 occupants.  In February 1951 it was reported that there were 390 people living at Karingal Hostel.

After about 30 years since it first began operating, AI&S began losing money keeping Karingal open and from 10 December 1977 it commenced the shutting down of Karingal Hostel.  At this time Karingal Hostel had only 75 residents compared to 175 at the beginning of 1977.  The steelworkers had been leaving Karingal in large numbers particularly as AI&S had withdrew weekend and public holiday service since May.  AI&S offered to help the remaining Karingal residents to find alternative accommodation before it completely closed down Karingal Hostel.

In 1982 the buildings at Karingal still existed not yet having been demolished.  Karingal was saved from the auctioneer’s hammer in November 1982 by the Illawarra’s Corporation for Redevelopment and Employment who believed Karingal could provide accommodation for Wollongong’s unemployed.  AI&S withdrew the sale of Karingal.  Karingal by this time was in a state of disrepair and the Corporation intended to improve the units using unemployed workers.  This was met with some resistance form Wollongong Council as they could not support the project without State or Federal Government funding.

In 1984 Karingal Hostel was demolished.  The buildings no longer exist but the site still remains and today is being used as a sports field once referred to as Karingal Sporting Complex but on today’s map is shown as BHP Centenary Park. 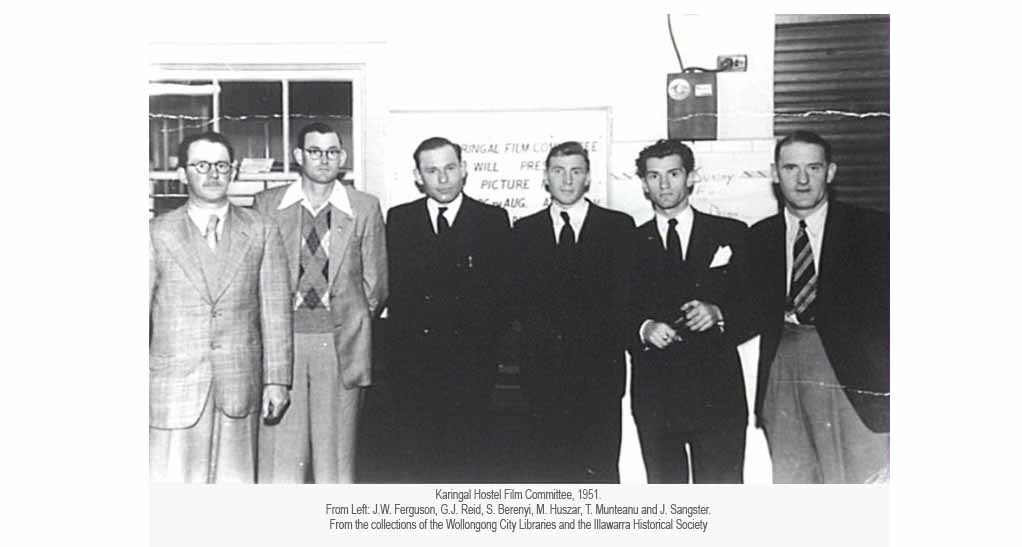 In 1956 Wollongong 2WL radio announcer, Tom Crozier, interviewed the supervisor of the AIS Karingal Hostel, Mr Carl Darling, for the weekly ‘Monitor’ programme.  The sound recording provides a firsthand account of life at the hostel.  To listen to the interview please follow the link <Karingal Hostel Interview> courtesy of Charles Slater.

The Australian Iron & Steel (AI&S) Karingal Hostel was built on Dharawal Country whose traditional custodians remain the Frist Nations people – Always was Always will be.

The Migration Heritage Project acknowledges the First Nations people as the traditional owners and custodians of the land upon which the stories of migration have been documented, recorded and explored.

The land is also significant to the early white settlement history of the Illawarra as it formed part of one of the first five land grants.  Karingal Hostel was built on part of the grant allocated to Robert Jenkins in 1816 and later enlarged by his widow Jemima Jenkins that was known as the Berkeley Estate. 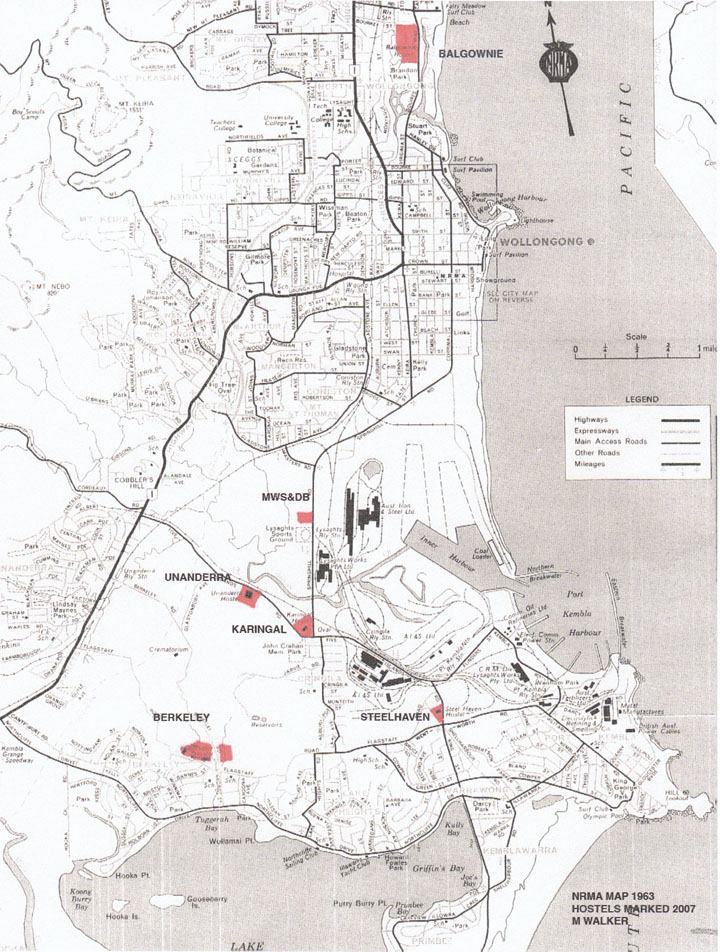