Robert John Edmund (Bob) Tyghe left England in 1957 with his parents, Robert Neil and Ethel Mary Tyghe and his sister Amanda Jane.  Both Robert Neil and Ethel Mary served their country during World War 2 and in 1957 they chose to migrate to Australia with their two children.  The Tyghe family left England on the SS Strathaird and arrived in Sydney on 11 October 1957.  Bob was eight years old.  Sixty four years has passed since he arrived Australia and lived at Berkeley Hostel but he remembers his first impressions of Australia as having loved what he saw.  This is his recollections of what life was like as an eight year old boy living at Berkeley Hostel from 1957 to 1959.

“I do remember that we moved from one hut to another, probably a larger one after the birth of my brother in June 1958.  We had an ice chest and all the kids flocked around the ice man’s truck in summer hoping for a sliver of ice to chip off when the larger blocks were being split in two.

The camp (Berkeley Hostel) had a large dining hall but we never had many meals there – it was the first time I had eaten creamed spinach; I thought it was yummy! Mum was an ex-Wren (British Women’s Royal Naval Service) where she trained as an Officer’s Cook so the meals were probably not to her liking.  Mum had a stove – how big and what fuel it used I have no idea – and an electric fry pan.  We also had a kerosene heater, ours was green and it used bright blue kerosene.

There was a deep gully running along the side of the hostel and we would play for hours in there – doing all the things parents these days would be horrified at.  One of the more dangerous was seeing if you could walk across a 12 inch water pipe that ran from one side to the other.  The drop to the creek at the centre was probably 12-15 feet.

On the other side of the hostel was an old quarry.  When it rained, we built clay dams in the gully by the dirt road that ran next to it.  The parents of a mate of mine from the hostel moved to a new house in Farmborough Heights.  I walked this dirt road to see him one day – nearly 6km – I was terrified when I left too late and had to walk home in the dark.

Berkeley Primary School in 1959 consisted of weatherboard-clad buildings but was still in Flagstaff Road.  One of the kids lived up the top of this road and invited me to his house after school.  When we got there, he gave me two baby rabbits in a box.  No sooner had I arrived home and Mum sent me back up the hill to return them.

Having the lake close at the end of George Street was a blessing – especially that first summer we arrived.  I do remember that most of the lake shallows were covered in masses of brown seaweed but there was a clear area we could walk through to the concrete-block breakwall.  We would climb onto the breakwater jump/dive into the deep water on the other side and swim around the end to do it all over again.

One of my girl friends (2 words) was Linda West.  To me she was very exotic with long dark hair, olive skin and beautiful dark eyes.  My Dad was friends with her Dad, John (I think they called him Johnny).  Sadly, the family returned to England (I believe) as did many others.

The closest friends we had on the hostel were the Tidswells; Charlie was Dad’s best mate, Alice his wife and three girls, Valerie (had a hairdressing salon in Wollongong at one stage I believe), Pam and Linda who was born not long after my brother in 1958.  We kept in touch with them – on and off – right up until my 21st birthday in 1970. 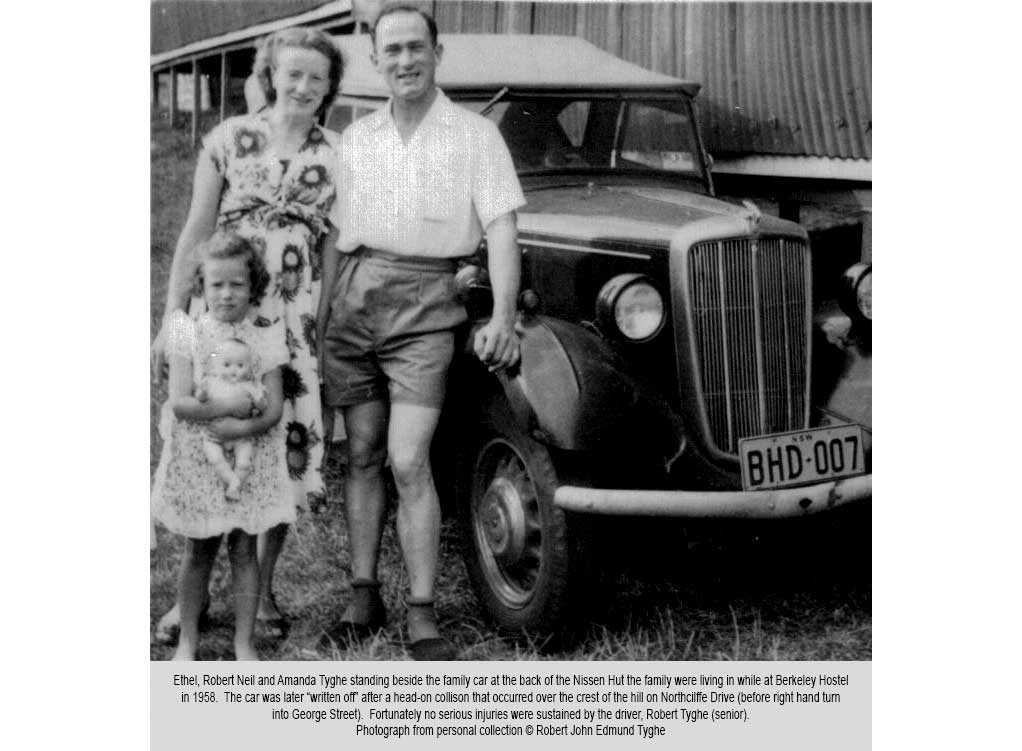 In 1959 the family moved to Anne Street Warilla, to a 50’ x 100’ block of land which was the standard size back then.  Dad built a flat roofed 8’ x 12’ unlined fibro garage.  A dunny toilet was built on the opposite side of the block.  There was a laundry tub that was used as a sink, a bath and a laundry.  There was no running water so we had to bucket water down from a tap at the front of the block.  We lived there for 2 years before our 10 square – that’s about 98 sq. metres – house was built.  I left home in 1965.

I guess, looking back to that time, I adapted to moving and living in a hostel very well.  I took it all in my stride, so to me, life just continued albeit in a different country”.

All of the three Tyghe children, Bob, Jayne and Michael served in the Royal Australian Navy.  Sadly, Jayne passed away in 1996 at the young age of 42 succumbing to breast cancer.  Michael moved away from the Illawarra and is now retired.  Bob met his wife (the girl of his dreams) at Shellharbour Workers Club in 1971 and has lived in various NSW towns.  He is now lives in the mid North Coast and is enjoying retirement.